I often think about how it must have been for those that resisted in the past, wondering if they also felt as if revolution was at their door. That they were on the peak of something different, closer to the freedom they so desperately wanted.

I impatiently wait for liberation, becoming more nihilistic with every co-optation and fizzled out uprising, dreaming of the day when taking the streets is an every day norm where escalated tactics are more than just a cat and mouse game with cops. For selfish reasons I feel like things are moving too slow, I want this burden of fear to be freed from my soul, and I want it now.

As the state continues to build it’s arsenal against the resistance and create more authoritarian agencies to stalk us. I wonder how long it is going to take for us to move away from a position of defense towards a more proactive stance against an increasingly more powerful fascistic state.

I find my self debating with people often on whether or not what we’re living under is even really Fascism, “we still have a free press” they say, “you’re not locked up in jail or murdered for your political ideas” they say, “how can this be fascism?” they ask. Now insert some WWI or WWII historical fact here and if one cannot prove that America is doing that exact thing, in this exact way, then we are not of course living under a fascist regime. Despite however the fact that in this country we are more surveilled than the populace in Nazi Germany, that America, after the war, recruited and adopted many of the Nazi’s all-star players, many of them top scientists and researchers.

And sure, I haven’t been imprisoned for the things I write or say – yet, but the state is carefully collecting and storing everything from phone calls to emails for later use. We’ve already seen cases of people being arrested for their Facebook or Twitter statuses – free speech ain’t so free after all. Let’s be clear though, the media is owned by a rich minority that is used as a complete propaganda tool for the state. The function of the state at this point is to serve corporate white supremacist interests both here and abroad. To do this they need Fascism and the force of the police state.

This however does not constitute as Fascism according to them. I guess we’ll have to wait for a more obvious form of ethnic cleansing, (enter statistic that is consistently increasing here) of black people being killed every day by police officers, but I guess this isn’t systematic enough. 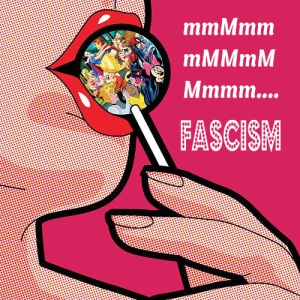 Does it matter what we call it anyways? In this time of highly propagated media you could probably market Fascism as something fashionable and chic. The public would eat it up. Have it run a candidate that’s a TV show host they love to hate just to draw them in, or wrap it up in Feminism, ‘cause it’s time to smash some glass ceilings (for some of us), or better yet throw some Socialism on it for others ‘cause you know you can’t be a socialist and a fascist. 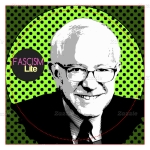 At this point is Fascism more dangerous than White Supremacy? Can you really have institutional White Supremacy without Fascism? and if so, then doesn’t that mean that America has always been a fascist state? Sure Mussolini may have coined the phrase but America has been utilizing the very same tactics before the idea was even given its fancy name, so give credit where credit is due.

America has always been fascist depending on what America you are talking to. If you’re a black and in America from the time of slavery this country has been fascist to you. From genocide, to a vast prison industry, the introduction of crack cocaine by the CIA , AIDS, segregation, and let’s not forget slavery. The Edward Snowden era anti-surveillance advocates only come at a time where now the tentacles of Fascism are effecting white America.

I’m sure depending on who you’re talking to and what part of the world they are living in Fascism will look and sound different too. Fascism for someone who survived the Holocaust may have looked much different than for someone who survived the reign of Pinochet. I think the major difference between now and the 1930’s are that governments are no longer openly fascist in name. Which is a great PR trick, but it does not change the fact that they behave as fascists. Take for instance Occupied Palestine also known as Israel by other fellow fascists. Israel resembles and inflicts a lot of the same persecution and terrible techniques used by Nazi Germany on the Palestinian people. They are also currently one of the major weapons and surveillance capitals of the world. They have imposed heavily militarized checkpoints and test chemical weapons on the Palestinian people, used forced sterilization on Ethiopian Jews, and what is Gaza other than a large scale concentration camp at this point?

So back to a question I asked earlier, does it matter whether or not we call it Fascism? The answer is yes. From the time we attend grade school we are taught that Fascism is wrong, that Democracy is key, and that WWII was a victory of good against evil and freedom against fascistic enslavement. The Nazis were good, but the Americans were even better when it came down to propaganda. Propaganda was repurposed and rebranded as Public Relations (PR), and Americans along with the existing international community, including the wealthy elite, knew they needed rebranding as much as they needed Fascism. So instead of calling it Fascism, they would call it Neo-Liberalism, or Democracy (their interpretation of it anyway), or however they decide to spin it, in the end Fascism is Fascism.

You can’t have a Fascist government without the individual fascists supporting it. The people who not only accept it but embrace it as well. It’s the see-something-say-something-signs plastered all over the metros in every major city, the newly proposed “counter-extremism” agencies already working unofficially to encourage people to surveille and snitch on people in their own community, and one that also makes anyone who objects or speaks out against the state look like a terrorist. It’s Darren Wilson getting a Go-Fund-Me account filled with thousands of dollars from sympathizers after he murdered Michael Brown. It’s ICE raids in the middle of the night breaking apart families, snatching parents away from their children and sending them back to their countries of origin, or to be held in prisons for profit. It’s FBI investigations in mosques entrapping Muslim people just so that they can justify their funding. It’s transwomen getting killed in the streets for just trying to walk fucking home. Fascism is gentrification, and the class divide present in the streets, with the various colored shirts on private police patrolling the streets of Downtown Los Angeles on bicycles harassing houseless people, having been called upon by white business owners or loft dwellers to protect property in conjunction with their lobbyists in the Central City Association. Fascism looks like being stopped and frisked on the streets just for being Black or Brown, a system in which these very same people are funneled into a justice system where state and private officials either individually profit due to career advancement or financially through the investment of private prison industries. Fascism looks like prisons threatening to sue states that do not aid in filling up their prisons to capitalize on their forced housing and forced labor. And at the macro level what global Fascism is when private companies and governments come to work together, such as William Bratton being the Chief of Police in New York and yet works with fascist Israel in financing police surveillance and training along with marketing it for an international audience of governmental bodies. Where the body cams being worn by the police are not to insure that the police are abiding the law but to better surveille the citizenry.

This is global fascism, and although I focus on America you can see Fascism all around the world. Currently the Dominican Republic is committing genocide against Haitian people, killing and deporting them. France is actively trying to control what Muslim women are and aren’t allowed to wear, banning solidarity protests with Palestinians, along with the prevalent state supported anti-Muslim/Arab rhetoric and violence inside the country that continues to escalate. I mean in Europe, overall, you are seeing very xenophobic reactions to the European and American white produced economic crash, where racial and class dimensions are playing out in whose to blame for the crisis. The increasing and continued attack on indigenous people all over the world by states in favor of corporations that do not care about mitigating their environmental disasters. Not to mention Mexico’s blurred governmental narco state that has lead to countless deaths, and Russia’s anti-gay laws allowing for more homophobic fueled violence.

As you see, Fascism is global and it’s going to take another World War to defeat it. This time, though, it won’t be one super power against another, it’ll be super powers against us.

And we must win.

← Depression is Political
No Leaders, No Masters: We Must Liberate Ourselves →