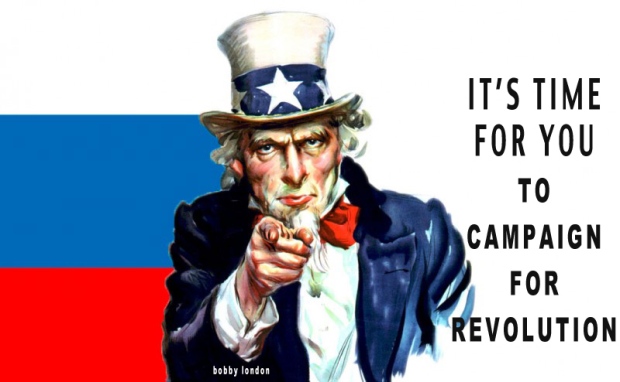 As the political landscape for the 2016 Presidential race begins to reveal itself, we are reminded again that democracy exists only in theory in this country. With a long list of American plutocrats, the presidential nominee list reads like an unredacted CIA torture report. Yes, American citizens will have a chance in November to vote for either new money or old money but either way money always wins. Let’s not kid ourselves, America has always been run by the oligarchs. Although the fact that we may yet again have another Bush or Clinton in the Whitehouse, the idea of only a few families running the country is as American as the Rockefellers and the Roosevelts. Don’t let the headlines and the righteous indignation from the left fool you  – we are not in jeopardy of losing our democracy, we never had it.

So instead of picking which millionaire or billionaire should rule over us, lets instead decide to vote for no rulers. The time has come for Americans to realize that their government no longer serves it’s purpose and therefore no longer deserves it’s power. The idea of governmental power is that of a social contract, in which we entrust that the government to provide protection and public goods and in exchange we grant the state a monopoly of power over us, entrusting that it is for the “good of the people”. But as more Americans are beginning to be exposed to what black Americans in this country have always experienced – that the government is not holding up to its end of the deal. And if all the government merely provides is protection and public goods, then clearly we the people can provide those things ourselves. Although we may refer to the government as if it’s a large machine that lacks humanity, it is in fact run by individuals, the problem is not just the individuals that they are run by, but the disconnect between government and the citizenry that exists.

You cannot have democracy and capitalism at the same time. Now, before all the Neo-Lib’s reading this article get their lemons all in a twist lets make sure we are using the true definition of democracy here. Democracy literally means people power. Meaning a country where people have the power to do more than just decide whatever elected officials will decide the boundaries of the rest of their life. A country where people have the power to decide together how their communities will exist autonomously, without the overarching power of some wealthy elite bureaucrat deciding for them. Now this is not the same line of thinking that most current day libertarians or capitalists who argue against big government have. Those ideologies are formed out of privilege and cynicism, because in reality the ones who shout down big government the loudest need it the most. Wealth and white privilege depend on government to sustain their systemic power.

This is why trying to work within these systems have proven to fail. At the same token, trying to merely opt out of them haven’t shown to be much of a success either. The reality is that one cannot simply opt out of the US government. Sovereignty is only reserved for white supremacists like Clive Bundy that can brandish high-powered rifles at state troopers without police retribution.

So it’s time to campaign for revolution. Declare ourselves the party of revolt and make our party platform one of autonomy, delegitimizing the US government with ultimately eradicating it for good. Now, I am not talking about running a candidate for the 2016 election. This is more based on the idea that we need to revitalize our propaganda campaign to something more than just “don’t vote”. Whether people vote or not in the next Presidential election really doesn’t make a difference, who ever wins is going to put forth whatever policies the oligarchs want placed. I’ve seen a lot of energy wasted on concentrating the blame of these disastrous policies on the individual President instead of the system itself. “Obama is deporter in chief”  “Obama has increased the war” “Obama…” and so on and so on but the reality is who ever took office would have high deportation rates, this is for the simple fact that deportation is a business and like all capitalist institutions you want to increase your profit line. One cannot argue that there is no difference between the two party line and then expect for Democrats to do anything other than support imperialism, capitalism, white supremacy and hetero-normativity. Voting is nothing more than something the rich elite have us peasants do so we can feel like we have more of a say in our world than what the act of voting actually supplies us.

The reality is that for non-whites and non-wealthy whites there is not a bill that can get passed or a candidate that can be elected that would effect the change that we so desperately need in this country. If we could simply vote away wealth inequality and install a regulatory process to ensure the end of abusive cops or administrators, we would have voted these ills away decades ago.

This is why it is time for revolution. Revolution in the simplest meaning of re-examining our current political process and changing it so it can better suit our current conditions, this is a process that should forever be happening and never stop, even slave owner rapist Thomas Jefferson knew that. The idea that we are currently bound to a singular document, and a theory that some out of touch privileged white men drew up hundreds of years ago is ludicrous. It is time we decolonize with the intention of working away from the idea of property and towards collectivity that we begin to redefine what this land mass currently known as America could really be.

← It’s Time for Black Liberation, Not Liberalism
How to Kill A Movement →

One thought on “Campaign for Revolution”